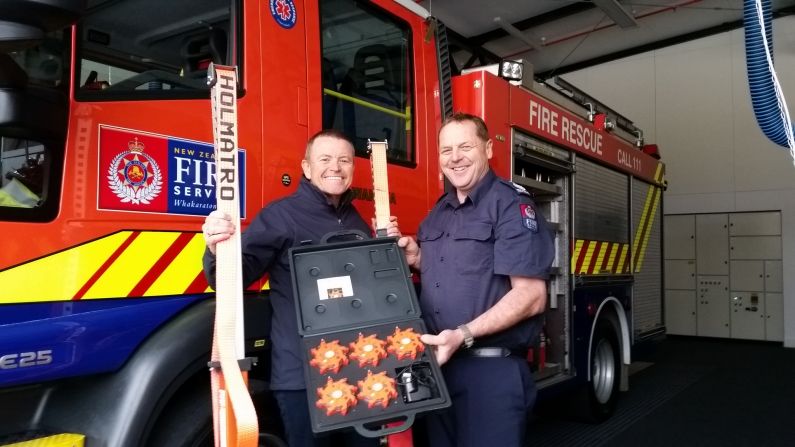 The Upper Clutha region’s three volunteer fire brigades have benefitted from the success of this year’s Warbirds Over Wanaka International Airshow. The Warbirds Over Wanaka Community Trust has donated almost $6,000 towards the purchase of new equipment including two struts to secure vehicles at the scene of crashes.

The struts will be kept on the crash rescue truck which is based at the Wanaka Fire Station but which attends crashes throughout the region, while the Wanaka, Luggate and Lake Hawea brigades will each receive a set of special LED emergency lights.

Wanaka Fire Chief Bruno Galloway says attending vehicle crashes is an integral part of what they do and in many cases requires specialist equipment and that having the struts means they can now secure a crashed vehicle so fire fighters and paramedics can more easily and safely get to victims who may be trapped inside.

The lights are also going to be a fantastic addition for attending crashes at night. They will have a number of uses including lighting possible landing sites for medivac helicopters.

The three local fire brigades have been involved with the event stretching back to the early days of the airshow. While WOW pays a fee for the fire trucks to be on hand during the airshow, the volunteers still give up their Easter break to be at WOW. It’s great that this year’s airshow returned enough of a surplus to allow us to make this donation which will hopefully make the jobs of these volunteers just that little bit safer.

Warbirds Over Wanaka Community Trust Chairman John Gilks says the donation fits well with the objectives of the Trust Deed which includes to promote, or assist to promote, activities beneficial to the community, particularly in the Upper Clutha area.