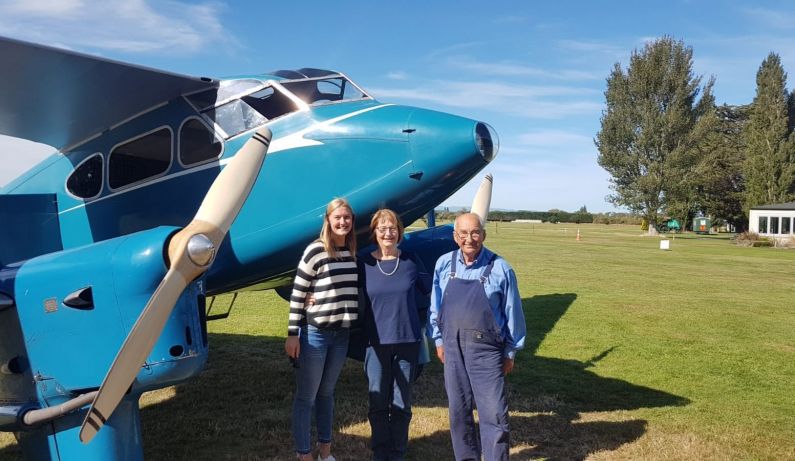 An accident involving a wood-working machine may have scuppered plans by Colin Smith to join the Royal New Zealand Air Force but it didn’t deter him, along with his wife Maeva, from becoming collectors, and world-renowned restorers, of significantly historic classic aircraft.
Colin’s early interest in aircraft was greatly influenced during a marine engineering apprenticeship in the mid to late-1950s while working alongside an ex de Havilland engineering draftsman Eric Edsal.  He also worked at sea with another engineer Arthur Maltby whose brother was a member of the famous Dam Busters squadron during WWII.

“Arthur claimed he was a better pilot than his brother and would take any chance to fly aircraft in any port we happened to visit.  I flew many hours with Arthur in India when we were based there,” says Colin.

On his return home Colin switched from marine engineering to farming.  He married his wife Maeva and between them they established one of New Zealand’s largest Perendale sheep breeding studs on Maeva’s family farm at Mandeville in Southland.

During this period, the opportunity arose to also become involved with the aviation industry and particularly with de Havilland aircraft that were used extensively in New Zealand from the early 1930s.

“We initiated a support structure for the maintenance of the older wood and fabric aircraft while still farming.  This took a major step forward when we decided to develop part of the farm into a registered private airfield and established an aircraft restoration facility on it,” says Colin.

In 1996 the Croydon Aviation Heritage Trust was established and a large hangar was constructed at Mandeville to enable the display and safe keeping of many of the older de Havilland aircraft as operational exhibits, many of which were New Zealand aviation pioneers.  Today there are some 12 classic de havilland types on display at Mandeville with plans to add at least another couple over the next few years.  Over the years the Smith’s have also been entrusted with a number of restoration projects for international clients.

Colin and Maeva’s links with Warbirds Over Wanaka International Airshow go back to 1990 when Airshow founder Sir Tim Wallis sent one of his WWII fighter aircraft down to Mandeville’s first fly-in.  “Sir Tim continued to support our events over the years and to see and hear a Spitfire on a grass airfield or a Mustang manoeuvring amongst fabric-covered veterans is a sight I’ll never forget,” says Colin.

Sir Tim’s support all those years ago is one of the main reasons Colin and Maeva make the biennial pilgrimage to Wanaka bringing a number of their classic de Havilland types to be part of the Southern Hemisphere’s biggest Warbird Airshow.
Photo:  Maeva & Colin Smith on the right, show off their Mandeville-based de Havilland aircraft, with Emily Wheeler, a friend visiting from England.
< previous story
next story >